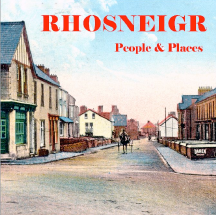 Contents : 208 pages in Eleven detailed chapters about Rhosneigr-related events, and the stories behind some of the people and places associated with this popular seaside village.

Plus lots more 'Then and Now' images of Old Rhosneigr.

'Rhosneigr - People and Places' is now available from Amazon and from selected local shops on Anglesey.